To win more work by producing better estimates, being more efficient and adding value to their project delivery model. Improve the consistency and delivery of information between the office, fab shop and the field.

"Bluebeam has replaced a piece of overhead in almost every single area of the business from estimating to sales; from project management to production in the field; as well as managing fabrication – all the way to acting as a marketing tool for us. It helps improve everything, from the revenue stream to the profit stream." 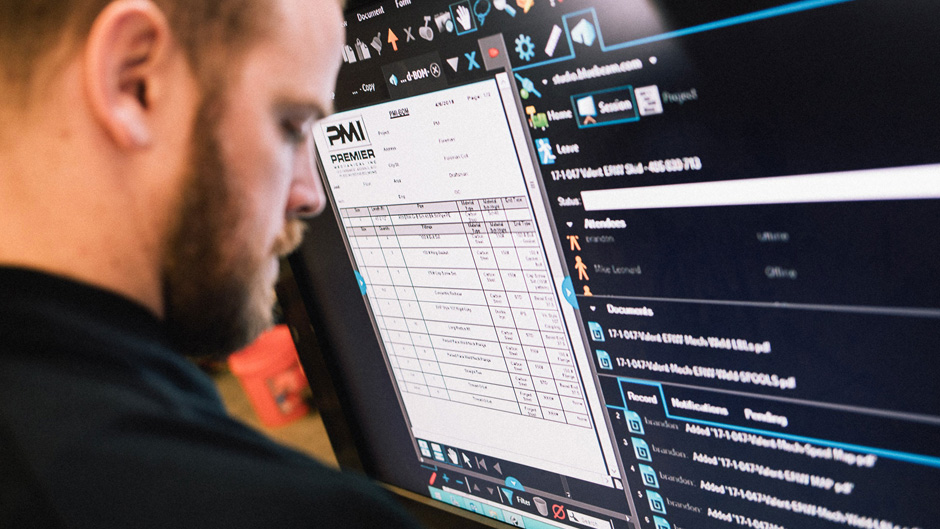 The US recession of 2008 forced many companies within the design and construction industry to shut their doors in the face of grave economic conditions. Premier Mechanical Co-Founder and President Martin Schulz decided his company would not only survive – it would thrive. Director of Operations Brandon Hubner and Director of Business Development Andy Hubner took on the challenge. “We literally saw double-digit growth during the recession,” explained Brandon. The firm did this by turning to Bluebeam Revu, a digital solution for paperless workflows that uses smart PDF files to share metadata, hyperlinks, bookmarks, images, attachments and 3D data for collaboration across the entire project lifecycle.

Premier Submits Better Tenders With Revu to Rise Above Their Competition

Upon discovering that Revu allowed Premier to create tender submissions digitally, the firm first used the program to create an entire custom markup tool set specific to their industry, allowing for more consistent and detailed drawings for tenders. “They all have different costs associated. We then plug that right into Revu,” explained Adam Oslos, estimator and project manager for Premier. “Now the drawings all get marked up, and we can print out a report showing all the quantities of everything in that estimate. Then there’s a guarantee that you get the counts right because there’s a visual verification there,” said Andy. The Batch Slip Sheet feature in Revu also replaced tedious addendum processes, and the custom profiles feature in Revu helped to add vendor information directly to the 3D PDF – making the document more accurately detailed for the client’s approvals. “When they see the sophistication that we’re using in the presentation, they know that they’re going to get that level of sophistication in the field as well – allowing us to compete in a market with competitors that are literally 10 times my size, but I can still offer the same level of product, if not a higher level of product,” explained Andy.

From plan-spec estimating to design-build, Premier’s estimating department now counts Revu as their competitive advantage. “We’re able to actually give a project-specific presentation; this isn’t a written narrative of what I’m providing the owner in a MS Word document,” said Andy. “Having the detailed 3D drawings is definitely a value-add that has pushed us over the edge on a lot of projects.”

As Premier Mechanical’s Director of Business Development, Andy has seen the direct impact on supply costs achieved by going paperless. “Prior to Bluebeam, we were buying about 10,219 m2 of paper per year, and probably spending somewhere around US$12,000 to 15,000 a year in paper alone,” he explained. This spending gave Premier a clear incentive to go paperless. They analysed the use of paper and the challenges associated with it before choosing to transfer the processes to digital workflows within Revu.

“One of the big challenges we had was document management for the fab shop,” disclosed Brandon. Paper communications were susceptible to workplace damage, or even loss, due to their fragile nature, manual markups were at times illegible. Going digital with Revu for these communications alleviated these issues. Hubner now uses Revu for collaborative interaction with the included Studio Sessions capability: “I am able to set up a fab session for the guys in the shop from literally anywhere in the world. I don’t have to be here to print out a spool-packet,” said Brandon.

Using Studio Sessions allows Premier’s shop workers and field installers to be in sync in real time. Every station in the shop now has an iPad® running Revu, which eases collaboration and cuts down on billable hours for field installers, as the mobile information is all they need. “We don’t measure in hours, we measure in minutes, and our guys cost US$1.35 a minute,” said Andy. “It’s difficult to put an exact, hard-dollar estimate to it, but it saves us a tonne of money.”

Promising project transparency for owners is often part of winning a bid. Many owners are now demanding more transparency, asking to see project progress in a more direct form outside of owners’ meetings. This puts the burden on potential bidders to create the highest level of transparency possible. The Studio Sessions capabilities within Revu give Premier that edge. “You never want to be selling on price, you want to be selling on value,” explained Andy. “Bluebeam Sessions helps us sell on value. We tell them about the workloads and say, ‘Hey we use Bluebeam in our fab shop and we will invite you to the Session, so you can actually see when your project is being worked on in there.’”

The complete transparency via collaborative Studio Sessions helps build trust with clients as they can log in at any time and see the progress of production or installation. The benefits also extend to the foreman in helping to schedule completed fab installations to the sites. Premier’s use of Studio Sessions gives clients another reason to choose them over their competition.

As Director of Business Development, Andy has kept a keen eye on the overall value of going digital for project management and communication. “I believe that typically, on average, every job that we lose, we lose by 3% or less. So how you get that 3% out on jobs is through 15 different things, it’s not one thing. Across the project lifecycle, Bluebeam Revu helps us get that extra 3% eked out to make us more valuable on jobs.”

More than two million pros worldwide use Revu to enhance collaboration throughout the design and construction project lifecycle.

Enter your email address and set your subscription preferences below to get Bluebeam news, product updates, tips & tricks and special publications.

We’d like to use cookies to improve your online experience and the quality of our service. Learn More